The Epitome of Gaudy: Gothic Jewelry

The Epitome of Gaudy: Gothic Jewelry 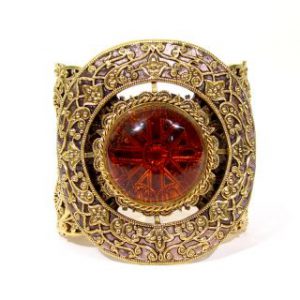 has and continues to be the epitome of gaudy.  Not only in an ornate, physical sense but it’s historical, cultural and spiritual context as well.

Thus, I truly believe it is extremely important for anyone who does or desires to make, market or purchase unique men’s Gothic jewelry to know its historical origins, cultural and social significance, spiritual connotations.

Because knowledge is power! And it is this same knowledge that TJDV  wishes to share with all!

The Epitome of Gaudy

Gothic Jewelry produced before the Victorian Era or Gothic Revival to its historical medieval Romanesque origin or more specifically, a period roughly highlighted by the end of the Crusades, European Age of Enlightenment, and First Industrial Revolution (~1270 to 1840 A.D.).

In reference to the word Now, I mean that Gothic Jewelry produced post-Victorian Era to present, or more specifically a period highlighted by fantasy and macabre like themes and imagery present in New Gothic Art and Medieval Gothic sub-genres and sub-cultures of today (~1910 A.D. to present).

The Birth of Gothic Jewelry

“Gothic” is a morbid term associated with the antiques Goths and Visigoths of medieval Northern Europe. Indicative of a Celtic motif shrouded in death, fantasy, transmutation, alchemy, terror and the macabre, Gothic jewelry enters the scene roughly 30 years after the Crusades.

By the early fourteenth century, trade between western civilization and eastern cultures once again thrive in the same magnanimous fashion as before the Crusades and the availability precious stones from the East, among other things, is in great supply. Along with new and innovative techniques in gem cutting, goldsmithing becomes a truly defined craft and skilled trade.

Therefore, the Romanesque jewelry of the 12th Century fell to the emerging Gothic jewelry in the late 13th Century. However, it is important to note that the real and inherent change from ‘Romanesque and Gothic’ style occurs in architecture, well before jewelry, as seen by the Gothic use of pointed, ribbed building arches as opposed to the Romanesque rounded ones.

In fact, Gothic jewelry does not make a real break from Romanesque jewelry well into the 15th century.  During this time, Gothic jewelry is primarily worn by the aristocracy and seen as a high rank in social hierarchy and laws were even passed to prevent the use of gemstones in certain jewelry sets.  Cameos were also highly prized and consisted of naturalistic forms of animals, ladies, and lovers.

In terms of men’s fashion, the classic garments and regalia of the 13th century Europe with their high collared necklines and long sleeves gave rise to both fanciful and gaudy belts, brooches, ring brooches, and rings.  More often than not, the brooches and ring brooches were engraved with love and religious epithets.  Belts were mostly leather with highly decorative gold plaques, buckles and belt ends with heraldic and agricultural motifs.  Rings and ring brooches were normally worn on all fingers, sometimes with more than one on a finger.

“By the 1450s the high necked dress made room for a new fashionable dress with a low neck.  This triggered the return of the pendant.  Other jewelry that was worn around the neck was the typical collars worn by the nobles.  Originally made of a fine fabric like silk or velvet and decorated with gold plaques the collar gradually was made out of gold only.  Golden discs or plaques would be attached to form a chain.  Collars were decorated with symbolic designs and often indicated membership to a knight’s order or specific function.  In Europe, the mayor of a town still wears a collar on official occasions (1)“. 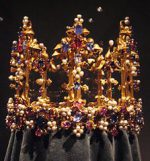 During the “Age of Enlightenment” or “Age of Reason”, Gothic jewelry starts to again resend into the barbarisms ideals, such as feudalism, alchemy, superstition, mystery, and the supernatural. However still, most jewelry is an embodiment of social hierarchy, nobles, and the court.

A Romantic Rebirth and Macabre Sentimentalism

The turn of the 19th century marked a profound change in Gothic jewelry style in terms of its social, spiritual and cultural premise. Coined the Victorian Era’s “Gothic Revival”, jewelry becomes a representation of growing spiritualism and romantic fervor, bringing with it the sentiments of the macabre, dark middle ages and Renaissance spirit. 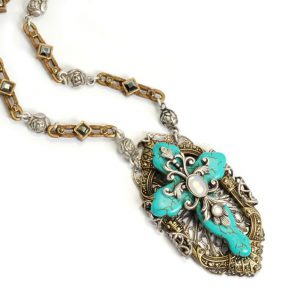 Nevertheless, it is my intention in this section of the article to focus on the Grand Period.  It is at this particular time, I believe really illustrates the ever-alluring macabre, middle-aged and sinister sentiments that influence the Gothic Jewelry we recognize and wear today.

A new spiritualism emerges.  The devotion to and preoccupation memorializing the deceased, especially of loved ones, as seen in daguerreotype photography.

The Grand Period begins after the death of Prince Albert in 1861, where Queen Victoria begins to contract and adorn “mourning jewelry”.  Ideally, this jewelry was and is literally made of up of the physical mementos of loved ones lost and is meant to commemorate their lives by adornment.  These physical mementos include organs and bone (both human and animal), hair, skin, and even real blood.

In all, Gothic jewelry today is a representation of Gothic society and culture of the 18th and 19th century or “Dark Romanticism”, invokes the romantic sense of alchemy, fantasy, terror, and macabre.  Its allure and mystery has not only endured centuries and spanned continents, but remained a significant influence in jewelry design and fashion to this very day!

So! For those interested in Gothic Jewelry, do not be swayed by the gothic stereotypes that you have to participate or join a particular gothic occult or adhere to a gothic physiognomy, a theory where one’s dark appearance denotes their personal character.  But, just simply be avid jewelry enthusiasts like us at TJDV, who just like the ‘Gothic Look’! 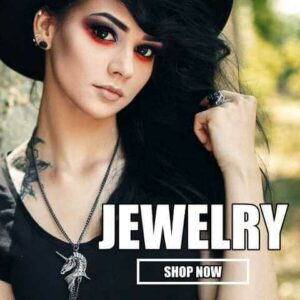